Hamsters are a species of small rodent that are used as power generators by the KND. They run all day in their wheels to produce electrical power for the various technologies used by the KND. TheSector V Treehouse alone contains several thousand hamsters. They are shown to be mischievous and highly intelligent, in a manner typical of mice and other small rodents in cartoons. Numbuh 3 is very affectionate and friendly to the hamsters, while Numbuh 4 hates them (which is justified, as the hamsters enjoy teasing him by stealing his soda and then spraying it in his face). Numbuh 2 is often assisted by hamsters in developing his inventions.

Episodes in which Hamsters are Prominent Edit Edit

Hamsters first appeared at the end of Operation: C.A.K.E.D., in which a massive army of hamsters is summoned to move half the Delightful Mansion From Down The Lane after the failed attempt to take the birthday cake.

In Operation: P.I.A.N.O., a hamster was used as a temporary replacement for Numbuh 4 when he is injured. Then when the whole team thus creating Hamsters Next Door.

In Operation: N.O.-P.O.W.U.H., they were given a vacation by Numbuh 3, causing the Sector V Treehouse to lose its power and leaving them vulnerable to an attack by Gramma Stuffum. At the end of the episode, the hamsters return and save the day by eating Gramma Stuffum's Food Army.

In Operation: G.H.O.S.T., a hamster named Chubbo dies and returns as a ghost commanding an army of ghostly hamsters. The living Hamsters were led by Numbuh 2's hamster Joaquin, to beat their evil ghostly counterparts.

In Operation: H.O.L.I.D.A.Y., their hamster holiday to Sector J was spoiled by Lizzie Devine and Numbuh 1.

In Operation: Z.E.R.O., the Hamsters were called by Numbuh 3 to hold off the senior-citizombiefied Numbuh 5 but transformed into senior citi-zombies themselves due to touching her. Later, they attack Numbuh 1 and Monty Uno in their house. After the two disappear in the bedroom, the zombie hamsters begin to play on the bed.

In Operation: H.A.M.S.T.E.R., an episode focusing entirely on them, they fight the DCFDTL's pet cats and feline counterparts, the Sinister Felines from Atop the Litterbox.

In Operation: I.N.T.E.R.V.I.E.W.S., the Hamsters Next Door are seen in the background stealing the Rainbow Monkey Lisa while Nick and Chip are talking to Numbuh 1. 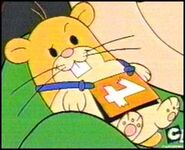 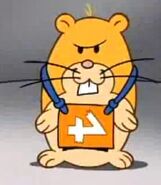 Add a photo to this gallery

Retrieved from "https://bradley-the-skunk-animal-next-door-adventures.fandom.com/wiki/Hamsters?oldid=577"
Community content is available under CC-BY-SA unless otherwise noted.